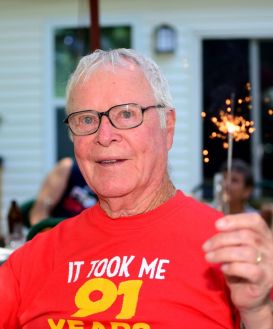 John William Heaney, age 92, passed away peacefully at home with his wife, Kathryn (Rusin) to whom he was married for 39 years, and his loving in-laws, Bruce and Mary Beth, by his side.

John was born in Santa Barbara, CA, in 1928 to John Heaney Sr. & Matilda Arrellanes. On his mother’s side, he was considered a “Californio” descendant of Spanish families who first occupied California. John was a member of The National Society of the Sons of the American Revolution. His great-great grandfather, Jose Francisco de Ortega, was an officer at the San Diego Presidio before moving to Santa Barbara, where he became Commandant. John was also a member of Los Californianos.

He was a graduate of New Mexico Military Institute and was later commissioned as an officer in Armored Cavalry after graduating from University of California, Berkeley where he took degrees in Political Science and Business Administration.

Moving to New York City, he began a career in pharmaceutical advertising. He’s listed in Who’s Who in Advertising. Taking early retirement in 1991, John and his wife Kathy moved to San Diego, returning to the State he loved so much.

The family would like to express our deepest gratitude to Continuum Care Hospice and ComForCare Senior Services for keeping John comfortable and safe in his final days.

There will be a Celebration of Life at a later date.